I’ll be honest, I flirted with SR 96 before. Nothing too heavy, just a few miles here, a few miles there. There were plenty of other highways, byways and county roads involved. We kept it light. No one got hurt. That ended today, and I’m on a short leash. Outside of La Crosse, I hooked a right on SR 96 W and will be on that road for more than 300 miles, across two states and time zones, all the way to Wetmore, Colorado. It makes navigation easy.

I was off to a late start this morning. The weather continued through the night, and the pavilion’s lights were hardwired on, so I settled down just as my alarm went off. I lazed around another hour or so, enjoying the cool before finally turning the cranks at 8 a.m.

The storm put a damper on the heat and wind — extremely pleasant riding in the mid-60s and with a whisper of wind from the north for the first few hours of the day. It sprinkled a little outside of Alexander, where I changed maps to section 7, with instructions to Pueblo (spoiler: west on SR 96 — if you’re looking to save weight, leave map 7 at home and write those four quasi-words on the back of your hand).

I hit Ness City for lunch at Pizza Plus, and walked up to an 1890 bank building, known as the “Skyscraper of the Plains,” architecturally interesting, though it’s dwarfed by every grain elevator across the great state of Kansas.

I planned to call Dighton home for the night, but it was only 85 degrees when I stopped for ice water and banana Laffy Taffy 70 miles in. Two older ladies at the convenience store told me I’d like Scott City — it has more going on, including an alleged dollar store. They asked where home was, and said they’d been to Pittsburgh. Said they enjoyed their visit. I told them to come back sometime.

I’m sprawled out in Scott City’s park on 12th and Main tonight. The pavilion’s got a nice roof, so I didn’t bother with the tent. It’s also got ground-level outlets and a deposit on the concrete that’s either vomit or ice cream with what looks like cookie topping. I’m giving it a wide berth. No shower in the park, but the kind folks at the nearby pool invited me in. 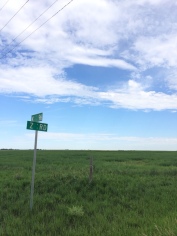 Dighton’s 1890 bank building is stunning, but dwarfed by grain elevators.

There are lots of these around, but this was close enough to the road for a decent photo.