I woke up in Richmond Times-Dispatch country and retired in the land of Fredricksburg’s Free Lance-Star. Changes in newspaper circulation and distribution are weird way to gauge progress, but there you go.

I had a quick start today without a tent to disassemble or ordinary camp chores to perform and made Ashland for lunch and a break during the hottest part of the day. It’s a pleasure to sleep in, but getting miles in early, while it’s cool, will become important as summer rolls around with its attendant heat and humidity. Might have to adopt the siesta, too.

Today’s maps included a ton of turn directions — more than 30 over 85 miles, and I was relieved Virginia’s marked almost every L/R with US Bicycle Route 76 signs. The 76 refers to 1976’s Bikecentennial, the first mass cross-country ride, and the framework around which today’s TransAm’s based.

After a brick oven pizza and break in the outskirts of Ashland, I entered city center and rode past Randolph-Macon’s campus, barren over the summer months, but still pretty.

I dropped a letter at the Bumpass P.O. Named for the Bumpass family (from the French Bon Pas, for “good step”), and crossed the community line with a sophomoric smirk.

Between Bumpass and Mineral I encountered my first dog, though he gave half-hearted chase (really, the best kind), especially past his property line. Good warmup for Kentucky’s famous canines. The same road afforded views of Lake Anna, a man-made lake built to provide cooling for two nuclear-powered utility reactors and waterfront real estate for some very nice vacation homes.

Camp tonight is Mineral Volunteer Fire grounds: plenty of soft, level grass and a hot shower courtesy of the department. The kindness bestowed on strangers is, well, a strange and fabulous thing. I hope to pay it forward. Sharing the space with me tonight are there high school friends touring together after graduating from different colleges. Phil’s riding a Fuji road bike and pulling a trailer while Elliot and Alex are carrying panniers on a Surly Disc Trucker and Specialized AWOL, respectively. They left Yorktown the day before I did and will finish in San Diego, dipping south to Mississippi, Louisiana and Texas — even visiting the Grand Canyon before finding the Pacific Ocean. Best of luck to them. Tomorrow, a shorter day to Charlottesville and Jefferson’s home at Monticello. 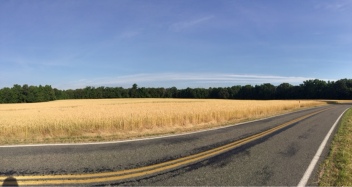 I noticed a ton of new homes being built around Mechanicsville/Ashland.

Easy way to keep an eye on your wheeled home.

But powered by Chevy. I’m pretty sure the rear hatch reads, “Scooby Doobie.”

Foreground: wildflowers; Background: wheat (hey, we can turn that into booze!)

Lots of great riding through rolling hills and horse pasture.

Alex found a putative possum jaw in Mineral. This is one of the decedent’s teeth.

Home for the evening. The department allows tent camping on its grounds and provides access to a hot shower.