I really slept in this morning and wasn’t on the road till just after 11 a.m., right as the sun was ramped to full strength. A mistake, but I was shot after a long day to Buckhorn and the lingering effects of Lookout’s hantavirus. Walter must’ve been off early, because I didn’t cross paths with him all day. We’ll have to swap contact info next time we meet up.

Lunch was in Booneville, named in honor of Daniel Boone, and seat of Owsley County. I resupplied at a Dollar General (that and Family Dollar are all over the place — the distinction escapes me) and took the cashier’s recommendation for Spencer’s Dairy Bar, just up the road. Not much is open on Sunday in a town of 81. There are tons of dairy bars and roadside ice cream stands — great fuel for a road-weary cyclist!

Near McKee I had to dismount my bike for the first time to deal with dogs. Two black labs and a few smaller terriers who were more curious than territorial, but still annoying. I don’t understand how people can (a) have that many dogs and (b) fail to train them. The homeowner had to yell for a couple of minutes before all but one retreated. The second lab kept me company for the better part of a mile down the road. I’m looking forward to Western Kentucky, reputed to have fewer dogs and gentler hills.

More elevation rounded out the day, including an impressive three-tier climb to Big Hill, not creatively named, but definitely an example of truth in advertising, where a welcome two-mile, 6-percent descent ushered me into Berea.

Home tonight is Oh! Kentucky Campground and RV park, which seems A-Oh!-K. I got in after the office closed, so I’ll settle up tomorrow. I’m taking tomorrow (Monday) off to see Berea, a college town of about 15,000, and give my legs a break before starting Map 10, which will take me 405 miles to Murphysboro, Illinois.

No shame, I started and finished this entire package of cookies today.

And a 2-mile, 6-percent downhill into Berea. Yeah! 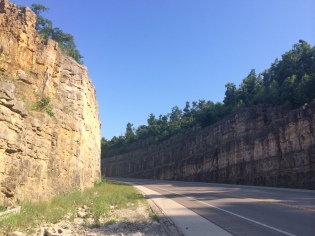