Fifteen: “How Black Black Can Be” (Hodgenville to Mammoth Cave National Park)

I took a side trip today. The TransAm, at 4,200 miles long, takes a lackadaisical track across the U.S., but even it offers Mammoth Cave up as an optional extra, tacking on 85 miles.

I got an early start to beat the heat, arriving in the park around noon (I also slipped into Central Time at the Hardin/Hart county line and gained an hour). In Munfordville I stopped to see Kentucky Stonehenge — exactly what it sounds like.

A dozen wild turkeys greeted me in the national park — all wildlife is federally protected, even snakes and spiders. I couldn’t get close enough for a decent picture without them running off into the woods.

There’s no entrance fee, but camping is $17, and you’ve got to tack on another $3 for a 10-minute shower. Come on! Pleasant campground, but the lack of walk-in sites meant lots of RVs. Interestingly, the bicycle’s the preferred means of transport (kids and adults) within the campground.

I took the 2 p.m. “Domes and Dripstones” tour, led by Rangers John and Steve, retired high school teachers. The two-hour tour covers 3/4 of a mile and 500 tight, twisting steps. Most of Mammoth’s more than 400 miles of surveyed passageway (more than twice as long as the next-nearest competitor, and geologists think perhaps 600 miles await discovery) are ancient dry riverbed, but a part of our tour took us to a wet area of the cave, where drips and seeps have created remarkable formations.

We entered though apparent doorway to nowhere (Dharma-initiative style) and descended 250′. The cave’s a cool 50 degrees F, and coming out the other end into the 90 degree heat and rampant humidity was like slamming into a brick wall. The respite was easily worth $12 all on its own. Native people explored the cave about 20,000 years ago through 4,000 years ago and researchers have found leavings (torches, shells, the occasional human remains) more than 10 miles in. There’s no evidence of exploration between about 4,000 years ago and 1798 when the cave was rediscovered by a hunter tracking a wounded bear.

The U.S. looked for status symbols in the 1800s — the country was an industrial and military power, but didn’t have ancient cities or the depth of culture Europe offered. In addition to Mammoth, the Grand Canyon and the giant redwoods helped bolster America’s reputation of scenic wonder.

In addition to its to not-insignificant tourist value, the cave produced a heck of a lot of saltpeter for the War of 1812. Congress authorized it as a national park in 1926 and it was established in 1941. Geologists and biologists are surveying the caves, studying how water moves through the area. An evening presentation by Ranger Jackie Wheet on the curiosity of caves related this anecdote:

Researchers frequently use dye tracing to track water movement. They’ll inject vividly colored (but harmless) dye in the surrounding area, and then wait to see where it shows up underground. They asked a nearby landowner for permission to trace his well. He wasn’t comfortable with the idea, and when the scientists pushed, he said, you can flush it down my toilet. Let’s see where my septic system leads. After all, he didn’t want to cause downstream problems. Well, a couple of days later the park gets a call from the guy, totally peeveed. He’s showering with green water. He thought they’d dumped dye in his well against his wishes, but his septic field and well draw were closer than expected.

Home tonight is the aforementioned campground. Site 81. While I was out, an enterprising squirrel helped himself to 14 cents’ of fig bars. I also rolled over 1,000 miles on the TransAm. 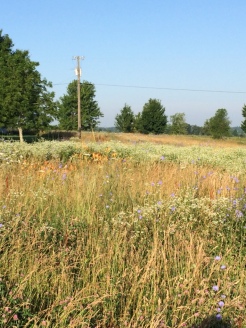 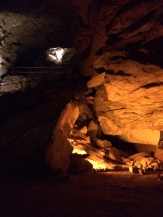 Most of the cave network is dry riverbed. 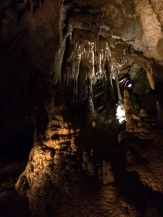 Our tour took us to a small section of wet cave where dripstones form beautiful artwork. 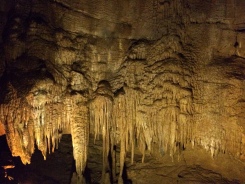 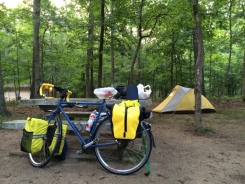 One Comment to “Fifteen: “How Black Black Can Be” (Hodgenville to Mammoth Cave National Park)”