Twenty: Along the Levee (Murphysboro to Chester)

It had to happen eventually. After a 19-day dry spell (in the best possible sense of the phrase), we got dumped on. It started raining around 11 p.m. and quit at noon. My tent didn’t spring a leak, and pitching on the gravel pad turned out to be a good call. We were both up early, but where Trevor couldn’t wait to get out of his bivy bag (and I don’t blame him — he says his top half stayed pretty dry, though), I was happy to sit out the rain and read.

Two exciting overnight developments: first, the bear/raccoon story. Trevor doesn’t have panniers like I do. He sewed together what’s called a frame bag. It sits inside the main triangle and is attached with a number of velcro loops. It’s a good way to keep the weight centered and travel light, or in areas where panniers’ extra breadth is a liability. In the night, something cut into his bag, and it was a bigger creature, because the cut was clean and direct. Made with a sharp nail. At first we thought a bear, but maybe a pair of industrious raccoons got to it. ANYWAY, the interlopers made off with his Cheetos (probably what drew them in the first place), all of his other food, his toothbrush and deodorant (?), and his fish oil pills. So at least they’ll have great joints, all the better to sneak around. Luckily, they left his water bladder and bottle of bourbon intact. So he’s got the essentials. The tent site’s past a spillway, down at lower elevation. This morning, the creek was raging and we couldn’t get back out the way we came. Trapped. Trevor ended up heading out a different way, luckily. I hung around camp till about 9:30 a.m. or so, when the rain tapered briefly, then made my escape. By this time, the spillway was clear enough to pass, though the 12″ drainage tube was gushing like a Tarantino special effect.

I retraced my steps out of the park back to Murphysboro, where the ACA provides an alternate route, along the levee. I’m working off section nine’s map, which will take me to Girard, Kansas. I wasn’t sure whether it would be passable with all the rain, but I was tired from the big day yesterday coupled with poor sleep, and wanted to give it a shot. It looked flat, and that was welcome news. Precipitation resumed (and then quit for good about noon), but I found the alternate passable, and very pleasant. Almost zero traffic — I saw perhaps five cars over 20 miles. You spend some time on top of the levee, and it’s serious. The river’s way down now, and the Mississippi not visible at most points. Some of the crops (mostly corn and soybeans) had flooded. Toward the end of the alternate, I crossed under a giant coal conveyer. It looked like coal was moving from land to river barges. Remember the quiet, flat levee roads? As soon as I turned left onto SR 3, both disappeared. The terrain picked up elevation and coal trucks constantly roared past. Maybe payback for escaping Kentucky intact. I don’t know how the citizens of Chester put up with the traffic. Every third vehicle on the road was a semi. Helps put in perspective how big a business energy (and coal) is here.

In Chester, I saw Trevor’s bike leaned up against a deli, and we spent a couple of hours airing our things out in Chester’s town square. The town of about 8,500 celebrates Popeye, as his creator, E.C. Segar, was born in Chester. We both decided to call it quits here. A short day, no doubt, but we wanted to dry out and rest. We’re stopped tonight at the Eagles Club, where my second TransAm Donna razzed us a bit, then showed us their accommodations. The Eagles offer tourists an air-conditioned bunkhouse, hot shower and easy access to their bar/restaurant for dinner and potent potables. After cleaning up and doing a little sink laundry, we climbed the hill for dinner. It’s a treat — and a little odd — to have a television on. Lots of World Cup action, including news of Uruguayan chomping?! I figured it was called football for a reason.

This guy popped up on our picnic table overnight.

A house in a sea of beans.

Doing my best to diversify.

Shuttling coal to and fro. 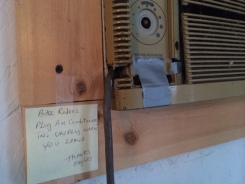 Make it a meat locker.

One Comment to “Twenty: Along the Levee (Murphysboro to Chester)”