Brian and Robin said the Breadbasket, across the street from the fire hall, serves a breakfast buffet, starting at 6:30 a.m. Tempting, but I’ve learned buffets are best left to the end of the day. I had a bagel with peanut butter and was rolling by 6:45 a.m.

The morning was cool, with a slight crosswind out of the south, which turned to my favor as I headed north through Hesston. I stopped at Casey’s for chocolate milk, and had my eye on the day-old doughnuts, but the manager wouldn’t sell them piecemeal, just by the dozen, which is probably for the best.

By this point I was hungry, with an eye on pancakes, and stopped in Buhler (Bueller, Bueller?), but everything was closed this early on Sunday, so I polished off an apple and bag of Cheetos in the park. Outside Buhler, I ran into a cyclist. He’s riding with his brother and father, SAG supported by his mom. They’re relaying through Kansas, each taking 30-mile stretches to “get through it.” To each, his own.

We rode together for a few miles, till I detoured off route to Hutchinson, a fair-sized city of 50,000, home of the Kansas State Fair, and my motivation, the Cosmosphere. The museum’s Smithsonian affiliated, and contains the largest collection of space artifacts (including German and Soviet examples) outside of the Air and Space Museum in D.C. It opens at noon on Sunday, so I had time for a couple of burgers at Bogey’s, a shake-and-burger joint reminiscent of In-and-Out.

The Cosmosphere’s special in that it takes you from the dawn of the space age, when the Germans put together the V-1 and V-2 rockets (at more than double the cost of America’s Manhattan Project!), through the post-war years, into the Cold War, and beyond. The exhibits are set up and explained by great narratives from both sides, explaining the Soviet and American approaches and motivations.

I finished up around 4 p.m., and hoped to escape the heat of the day nerding out, but it was still 95 degrees. Bottles stuffed with ice water, I got back on route and made for Sterling. I rode past the back of the exotic animal farm, spotting zebras, camels, giraffes and emus. None posed for photos, but this blog being on the internet, I’m sure you can make do.

The wind ran with me the last stretch into Lake Sterling, home for the night. I pulled up to the pool and parked next to a Pinarello Dogma. Fancy. Travis, the pool manager, told me it’s a knockoff, complete with an English-threaded BB shell. He rides with a guy who has two legit Pinarellos (good problem to have) and he says it’s pretty close. In fact, he has one as a rain bike.

We kept talking, and then mentions the grocery store closes at 6 p.m., which is in seven minutes. I blast out of there, moving way faster than I had all day. Luckily, it’s a small town and I make the mini-Dillons with a few minutes to spare.

I’m set up in the park’s pavilion. The pool closed with the grocery store (and you can’t buy beer on Sunday in Rice County), but the bathrooms are open all night, so I grab a warm shower later in the evening and wait for the heat to die down. There’s a grain elevator here, complete with rail line, but it’s quiet all evening. No need for ear plugs. 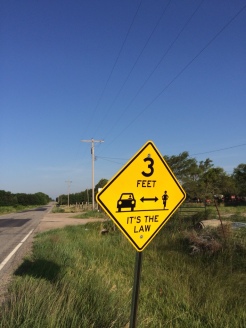 It’s the law. Great to see these signs in the middle of nowhere (outside Hesston).

I’m sure this works as a great billboard for the museum. 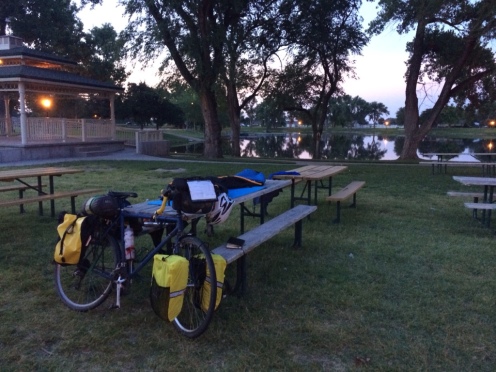 Home’s Sterling Lake Park. Electricity, bathrooms and a hot shower. Heaven. I rolled the dice and slept under the stars.