It was cool this morning in Scott City, but something about the air let you know it was going to be hotter than yesterday. Right out of the gate, I came across a half dozen feedlots. And with the wind out of the south, the smell carried quite a ways. The first modern windmills of the trip appeared around the same time, and they were twirling today. It’s interesting to see such an ecologically damaging businesses operating  close to renewable energy. Crossing the Greeley/Witchita county line puts me in Mountain Time. The extra hour’s welcome on a high-mile day like this. I stopped for lunch in Tribune at Karen’s Kitchen, the only game in town. She’s diversified, sporting a grill inside her antique shop. Tribune’s also the last substantial town for nearly 60 miles, so I  fill my bottles with ice water and ran into Foster, who’s working his way east. He’s never been to Kansas. Enjoy, buddy.

At the Colorado state line, I snapped a “Welcome to Kansas” photo that should have happened on day 26. Pretend with me. Just inside Colorado, Towner was home to a mile and a half of empty railcars parked on the tracks. In Sheridan Lake, I stopped for more water and an ice pop at the service station before pushing 25 desolate miles through Brandon, Chivington and the site of Sand Creek Massacre. Eads’ (pop. 600) rest stop proclaims I’ve reached the halfway point of the TransAm — some say it’s Pueblo’s city hall. Either way, I’m close. Outside the grocery store, I run into Josh and Elise. They’re engaged and  started in Newton, Kansas, about ten days ago, and are headed for San Francisco. Josh is replacing Elise’s rim strip — she’s been getting small pinhole flats and they think the tube’s rubbing the inside of the wheel. I picked up a 1/2 gallon of milk at the grocery, and just in time, as it closes in 30 minutes, at 5:30 p.m. The clerk tells me they have a pool, but it closes at 5 p.m., the library at 4 p.m. The kind ladies at the pool took mercy on me and let me have a quick, cold shower. Thank you, thank you. Back to the grocery, where Josh and Elise have abandoned their plans to head 20 miles down the road to Haswell as the wind’s picked up considerably. We head to the laundromat so they can start a load before going to dinner at K&M Ranch House. They had lunch there, so we know it’s a good (and our only) bet. In the laundromat, a local comes in and offers us a shower at his house for a $10 donation. We pass — creepy. Our second visitor, Andy from Amarillo, Texas, was a treat. He’s passing through town, saw our loaded bicycles and came in. He and his wife pedaled the TransAm in 2002, he gives us a few bucks for dinner and tells us tales from the trail. Said folks bought him a meal or two while he was on the road. Again, the generosity of strangers astounds.

We finish up dinner just in time to set up at the city park before the sun sets. Lots of wind and lightning in the distance promise a lively night. It’s basic — a couple of electric outlets and a spigot, but no bathrooms or showers — we use the rest area across the train tracks, about a 1/5 of a mile away, but’ll do just fine after a 100-mile day.

Never let it be said white men take the credit for everything. 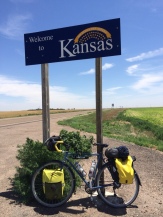 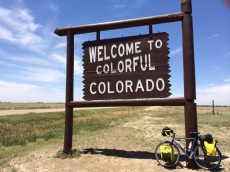 You can see Josh and Elise’s tent in the distance.