Thirty-Eight: I was Promised Buffalo (Royal Gorge to Fairplay)

Well, Bill was right. I didn’t make it to Guffey yesterday, and it turns out that was OK. I was off to a late start after excessive beer consumption at excessive altitude, coupled with the fact that I had two whole days to make Breckenridge, and don’t need to pound out the miles. It was all uphill to Guffey, but the views were spectacular. Toward the bottom of the climb I ran into James, who’s headed east from Washington to Tennessee and riding with a giant American flag on his rear rack. He says regardless of its reception (“America — yeah!” or “Flagwaver…”) it’s done its job because you noticed him. Traffic was pretty light, but when it did come through, it was in waves, because of the uphill, curvy, two-lane road. Usually with an RV towing an SUV towing a pair of ATVs at the head of the pack. Ten miles from Guffey, I ran into Janet and Stephen, working their way east, before heading back to Washington — they’re making it an honest door-to-door tour. They spent the night with Bill, and gave me restaurant recommendations. Apparently this town of 16 has several.

I had lunch at the Bull Moose at 8,600′, where the owner and I talked a little about what cyclists look for re: price and amenities in lodging. He’s thinking about adding a bunkhouse for tourists. After a quick stop at the liquor store for a pair of Snickers bars, back to the road, which flattened out for a bit before taking me up Currant Creek Pass (9,485′), a tough climb dividing water between the Arkansas and Platte rivers. There’s no sign at the top, but your reward is a sweet downhill all the way to Hartsel. I stopped for a Coke and some Dum-Dums at the general store and waited out the rain that’s coming through. It looks like it’s pushing to the east, but I got wet about five miles outside of Fairplay, and to make matters worse, there’s no sign of the Buffalo that James and the waitress in Guffey said I’d see coming into town. At least I haven’t seen a single ear of corn all day. I planned to stay at Fairplay Beach, but despite what the map says, there’s no camping. Luckily, just down the road’s Middlefork RV camping site, where I met Bob, a Carolinian who left Yorktown on May 3 after retiring at 62 on May 1. We talk to the Tommy and Janice, the camp operators, and they say we can split a site and put tents up for $10 each. Deal. It’s tough to find free lodgings in Colorado, and my dollar’s not going as far as it used to. This is high tourist season, and Tommy says a lot of these towns have to pull in 75 percent or more of their annual revenue during the summer months, especially if they’re not in ski country.

It starts to absolutely pour as we leave the office to set up camp, so we hide in the bathhouse/lounge trailer. The rain doesn’t quit and, all told, more than an inch falls. Bob and I decide to lay our sleeping bags out in the lounge for the night. Because I’m shorter, I get the couch. He trained as a chef at the CIA, before selling groceries for Sysco. A few years back, Bob spent a season overseeing a restaurant in Yellowstone, and tells me the best place to watch Old Faithful erupt, away from the crowd. I’m sleeping at 9,900′, probably my steepest slumber on the TransAm. 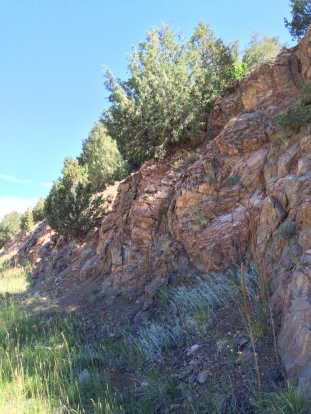 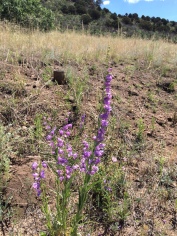 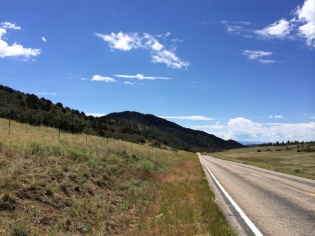 I spotted a few cabins in disrepair along today’s route.

Bob and I hid from the rain inside the park’s lounge.

2 Comments to “Thirty-Eight: I was Promised Buffalo (Royal Gorge to Fairplay)”