Forty-Nine: Last Place and Loving It (Walden to Saratoga, WYOMING)

This morning was chilly at 8,000′, but putting the tent up made a big difference. And the sprinklers didn’t soak us. Because I waited for the sun to get a little higher in the sky, the Swiss beat me to the trail, but I have a feeling I’ll see them again because of the distances between towns out west. There just aren’t too many options unless you want to push for boku miles or camp alongside the road. Right out of Walden I came across several ranches and lots of cattle. This area of Colorado’s known as North Park, and is a geologic basin on the western edge of the Front Range. There’s plenty of water from the Michigan, Illinois and Canadian Rivers (Hey, we are in Colorado, right?). In the past, Indians called the area Bull Pen for all the bison it contained.

I entered Wyoming, my seventh state, about 20 miles in, and the wind was working with me — or at least not actively against me — so I made good time. A few miles into Wyoming, I met Thomas C., an older gentleman who’s competing in the TransAm race. He enthusiastically told me he’s in last place and enjoying every minute of it. Unlike most of the adventure racers, he’s pulling a trailer and has rear panniers. He’s loaded. He gives me directions to a little-known hot spring near Lolo Pass. Just behind him is Nick, from Albuquerque, who’s fallen in with Thomas based on similar paces.

I stopped in Riverside for my first chocolate milk since Kremmling, then pushed to Saratoga. It’s 2 p.m. when I make town, and I thought about more miles, but it’s hot and the next place to stop would be Rawlins, about 40 miles away. The woman running the pool in Walden told me it’s a “prison town” and not the most pleasant place to be. And there are free hot springs in Saratoga, so I decide to stay here tonight. After spending some time cooling off in the library, I grab a shower at the free (and open 24/7) hot springs before soaking in one of the pools. There are two: one’s 118 degrees Fahrenheit, the other’s cut with cold water to 104 degrees Fahrenheit, which is more bearable. A local tells me the hotter pool’s perfect when it’s 40 below. The water’s not treated, so it smells a little like rotten eggs and there’s a healthy population of algae on the concrete, but man does it feel good on my legs.

Home tonight’s Lake Saratoga campground. When I pull in, the Swiss have already set up camp. There’s water, but the sign advises against drinking because of its high mineral content. It tastes OK and I hope one day’s consumption doesn’t do me in. It’s a very pretty place to spend the night. Light rain, high winds and hard ground for tent stakes make it an interesting evening.

A healthy smear of ZnO completes the look. 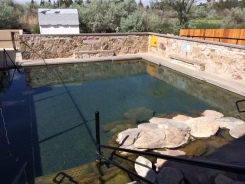 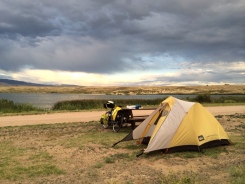