After breakfast, I found Adventure Cycling World HQ on Pine Street. Sarah took my photo for their wall, offered me ice cream and an ACA flag before giving me a tour of the building. A spandex-clad VIP.

I also met Greg Siple, a founding member, the back-page photo guy and much more. He had me fill out a brief bio and photo release, then took a photo of me and the bike. We also threw it on a hoist and weighed ‘er: 80 pounds before a trip to the grocery store. The ACA folks are headed to Pittsburgh for a conference soon and have the opportunity to ride the GAP. I advised fenders and wider tires.

On the way out of town I picked up provisions for the next two days since there’s not much till you hit Kooskia (coo-ski). Map 3 opens with a pretty, and pretty desolate stretch along Highway 12. I backtracked to Lolo (a trip to Missoula is an optional extra (but who wouldn’t?)), where I stopped at Travelers’ Rest, a confirmed Lewis and Clark camp. Staff said I’d be OK camping anywhere in the National Forest.

The route takes you past Fort Fizzle, an emplacement built hurriedly to engage non-treaty Nez Perce as they headed deeper into Montana. The Nez Perce simply passed undetected at the next ridge, earning the fort its name. This was a welcome failure, given mixed public and soldier opinion on Indian policy and the Nez-Perce War. Every few miles stands a post letting me know there’s another post that will tell me something historic about the area. Just in case I miss it at 14 m.p.h.

Then up Lolo Pass (5,235′), into Idaho (no. 9) and Pacific Time. It sprinkled briefly on my climb, but rained steadily on the descent. I stopped in Powell, the last service for 66 miles. You can camp behind the store for free, but the storm passed, so I filled all four bottles for a dry camp and continued on. I had a destination in mind.

On Day 49, Thomas C. told me about a hot spring on panel 32. Jacob and Megan also mentioned it at Jenny Lake. The turnout is easy to miss, but drag your bike just a few minutes up the path and you’re rewarded with a gorgeous campsite right on the creek. I have my food hung from a tree , just in case. The best part about this free site is the natural hot pool 10 minutes up the path.

It’s public, and I hear can be busy at times, but it was all mine when I hopped in. Maybe 105 degrees, it’s too warm to stay in for more than a few minutes. It’ll stand in nicely for a shower. A little later, four young ladies joined me. They came from Portland this morning (!), headed to Missoula. Natalie out-and-back cycled the stretch they’re driving a couple of years ago.

We spotted a big pine tree on fire in the woods past the pool. They’re gonna call it in once service is available. Hopefully no one wakes me up. 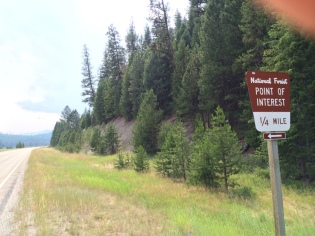 Lots of these today — Lewis and Clark territory. 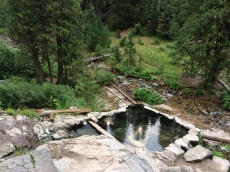 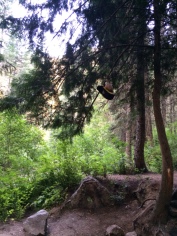 Hanging attractants from a tree. 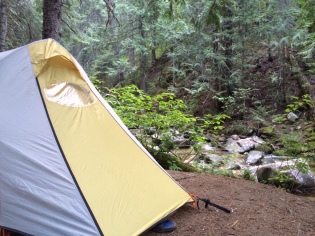 My favorite outdoor spot by far.

One Comment to “Sixty-One: “Point of Interest” (Missoula to Weir Creek, IDAHO)”