Sixty-Six: Rolling on its Grave (Bates to Dayville)

Oregon’s a cloudy state. Here, rumble strips are called fog lines. Between Mount Vernon and Dayville, ODOT’s kept busy repaving. They cut rumble strips into the shoulder only to be reminded that code prevents fog lines on any shoulder less than 4′ wide. So they had to go back and pave over all their hard work — a bummer, but score one for cyclists. Rumble strips stink.

I had company this morning. Two park rangers came in for maintenance work. Mostly tree-trimming — this is such a new park that the vault toilets smell more like plastic than, well, a toilet.

Chilly, I dawdled leaving camp. Outside Bates, I climbed my last triplet pass, Dixie, and descended for the rest of the day. In Prairie City I stopped for coffee and became the grateful beneficiary of two lightly burned cookies. Take what you can get.

Between Prairie City and Dayville is John Day, a fair-sized town of 2,000. The library’s open 1 p.m. to 5 p.m. on Saturday, and I booked a flight home for a week out. The trip’s coming to a close. I’ll see the ocean in a few days, and be in Astoria soon after.

Smoke hangs over much of Oregon, but Dayville is positively on fire. Crews are around, but because right now, National Forest is burning, they’re idle, waiting for it to edge onto private property. This inaction has locals frustrated. It’s close — smoke makes 2 p.m. look like twilight, and ash’s fluttering down.

I’m stopped tonight at Dayville Presbyterian — my first church stay since Dubois, Wyoming. Rose, the caretaker, said they’ve hosted cyclists since the ’70s. A big step up from the tent: shower, wifi, full kitchen and laundry. Rose also showed me where the pancake mix is for the morning, though I’ll need to be up and out early lest I become part of the service. 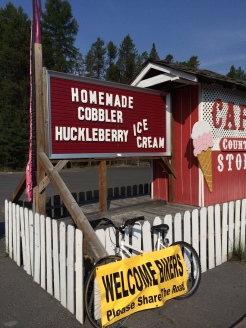 This place will let you campt out back for $5, but you’re not allowed to cook. So I went back to the park, about 1.5 miles away. 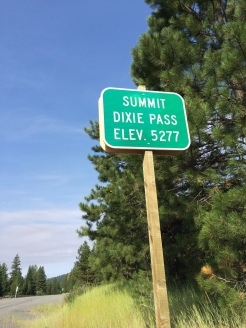 My one and only pass today, the third of the triplets.

Shoulders must be 4′ wide before fog lines are allowed. This shoulder’s not that wide, so ODOT had to pave over the rumble strips and try again.

Look at the top of the photo. That’s the sun, taken around 3 p.m. 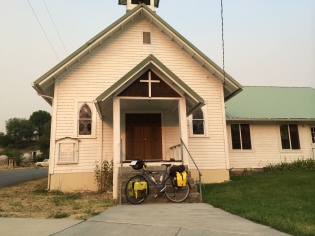 Home for the night is this church hostel, the first I’ve been in since Sebree, Kentucky.