I saw the Pacific today. Seventy days after leaving Yorktown I’ve pedaled coast to coast. There’s still one more day till Astoria and the end of the line, but seeing big water was special.

Up and out of Corvallis early this morning, I ran into a several community cyclists, including a public-school teacher on a recumbent. Corvallis is an easy place to ride with plenty of bike lanes and alert drivers.

The first part of today’s ride was flat and chilly. I stopped in Monmouth for coffee, and picked up bike path to Highway 22, a busy road with a wide shoulder. I left homes and businesses behind for flowers, vineyards and logging operations.

I found a great roadside fruit stand outside of the Indian Casino in Rose Lodge. The best kind of juicy, messy peaches and other produce. The lady working told me I saw Italian prunes along the roadside today, and that lots of fruit grows wild, including blackberries. They’re just coming into season, will grow absolutely anywhere and are an instant snack while on the bike. I stopped a bunch of times for a fistful or two.

Outside Neskowin, on Historic 101, I met my first tourists of the day. Three separate parties, all headed south on the ACA’s Pacific Coast Route, which runs 1,850 miles from Vancouver, B.C., to Imperial Beach, California, on the Mexican border. Everyone’s riding south because of the reliable northern wind. Neskowin beach gave me my first glimpse of the ocean, but  I didn’t quit here, venturing deeper into Tsunami Danger Zones, with one oddly placed evacuation route leading to a no-outlet street.

I stopped in Pacific City for groceries, where I spent a few minutes talking to a family from Portland about the ride. They just had a friend of a friend stay for a few days in the middle of a ride to Argentina. He’s got a ways to go.

The hills kept getting steeper and more frequent as I got closer to my destination, Cape Lookout’s campground. I’ve discovered reaching the coast and closing in on the ocean doesn’t mean flat ground. Home tonight is a $6 H/B site at the park, hot shower included. Our campground’s removed from the the rest of the park, tucked into the day-use area. I’m probably 200 meters from the ocean, but can only hear it roar through a thick blanket of fog and drizzle. It’s a special place to spend the night, that’s for sure. 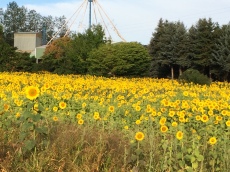 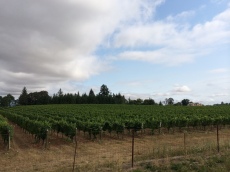 Lots of vineyards this morning. 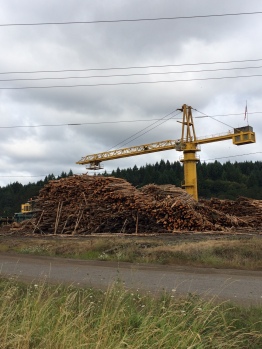 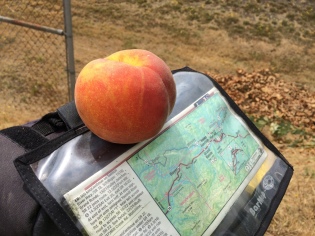 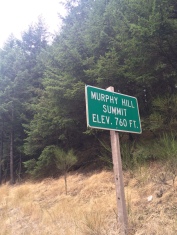 760′, but still pretty tough to clamber over. 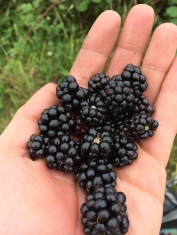 They’re everywhere and just came in season. I stopped many times to grab a fistful or two. 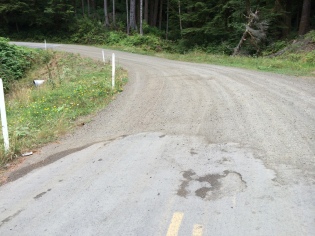 So scenic and lonely ODOT decided that it’s OK to have a patch of gravel in the middle.

After 70 days, I see the ocean. I still have more than 100 miles to pedal, but I’ve made it coast to coast.

The H/B rate gets you in the park for $6, but it can’t save you from the line.

I’m about 200 meters from the ocean, but it’s so foggy all i can do is hear it. Great camping.