Prologue III: There Will Be Mud

It was a night of light rain and heavy rail — the denizens of Rockwood are saints for putting up with all the traffic. But it was a day full of adventure: the GAP saves its most interesting marvels for the final 25 miles.

Leaving Rockwood behind, I started a slow climb toward Deal, and though I wrote about that last night tongue-in-cheek — after all, what’s 564′ over 15 miles — I was dragging a little this morning right out of the gate. Did pass though two impressive viaducts that allowed trains to cross over valleys and/or water, the Salisbury at 1,908′ long, and the Keystone at 909′.

I stopped in Meyersdale Station (maple syrup capital of the commonwealth!) for lunch and a little shopping. While I failed to locate any light oil or chain lube — the rain and grit have been doing a number on mechanicals — I did find my first honey buns of the trip. God bless corn subsidies, because these little morsels of HFCS work out to 1260 calories/dollar, and I bet there are better deals waiting for me. I also bought some “real” food.

Suitably hopped up on sugar, it was about 10 miles to Deal in light rain. There, you pass though the Eastern Continental Divide, which divvies water into either the Chesapeake Bay or the Gulf of Mexico.

The climb to Deal was well worth it: in addition to having gravity on my side to Cumberland, the views were spectacular and I picked up a great companion in Subu, a fellow Pittsburgher riding a blaze orange Salsa scandium softtail MTB to Washington and staying in hotels or B&Bs along the way. We rode together as far as Cumberland and conversation made the miles fly by. (OK, maybe the 1,785′ descent helped. A little.)

We left the rain behind for 3,294′ traversing the Big Savage tunnel. The hits just kept coming, like the tail end of an Independence Day firework display. With Big Savage still in our rearview (purely a figure of speech, I don’t have one of those little clip-on mirrors. You’ve got to draw the line somewhere.), we crossed the Mason-Dixon Line into Maryland. Much more romantic than the placard you blast by on I-70, the diagonal demarcation’s made of stone and a nearby plaque tells the story of wealthy British colonialists Penn and Calvert, who disagreed about land ownership, with each claiming some of what the other felt was his territory. So, they hired Mason and Dixon to hand down a verdict — thus the Mason-Dixon Line. Somewhat amusingly, the Revolutionary War started not soon after and both the Penns and Calverts lost their land to the freshly minted US of A.

Just past Frostburg, the GAP’s concurrent with the Western Scenic Railroad to Cumberland. No tourist trains today, but Helmsetter’s Horseshoe Curve caught our eye. It hosts a bend so tight passengers on both ends could see each other as the train negotiated the turn.

In Cumberland I said goodbye to Subu, who was calling it a day. I bought chain lube at a bike shop and set off down the towpath, wanting to get at least a few miles in, considering the weather. While the GAP is crushed limestone and well drained, the C&O is pea gravel, tree roots and mud (dirt if you’re lucky and it’s dry). The GAP’s also newer and in generally better condition. Almost immediately there was copious evidence of heavy rain: ruts, mud wallows and deep puddles. While I would have enjoyed Subu’s wide tires and suspension, my fenders did a decent job of keeping me clean and dry.

Not too far down the towpath a construction crew was hard at work replacing an aging culvert that the last rain had pushed over the edge. I  pulled off to the side as a crane lumbered past.

My overnight halt is Pigmans Ferry, a hiker-biker site at mile marker 169. It’s all mine tonight. Well, me, the bullfrogs and mosquitos. If the trail’s not too mucky and slow tomorrow I’m aiming for Williamsport, where my parents coincidently booked a lock house for the weekend. Hopefully they brought beer.

Crossing the Mason-Dixon Line into Maryland. Subu’s in the yellow rain jacket off to the right.

The coast down from Deal afforded us great views, when not obscured by fog.

Helmsetter’s Horseshoe curve was so steep patrons on either end of the train could see one another while the locomotive negotiated the turn.

Coming into Cumberland, this 1000-foot gap between mountains welcomes you. 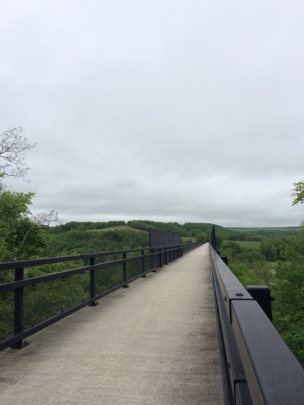 Second in my immaturity series, a bench endowed for an upstanding citizen.

Crossing the Eastern Continental Divide in Deal. Here, water is sent to either the Chesapeake Bay or Gulf of Mexico.

Big Savage Tunnel where we spent 3,294′ within a mountain.

The C&O’s 184.5 miles, and starts right here, in Cumberland, Maryland. The other terminus is in Georgetown. 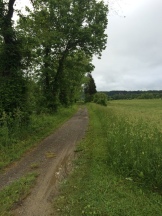 Sample of the towpath. This bit looks pretty good, and I’m pretty sure this is where I just about cried as a 12-year-old, frustrated by the rain and mud in 2000 on my 24″ MTB. Being 12 is hard sometimes. There’s a small Civil War graveyard nearby.

Where I stayed tonight, and an example of signage. Every 5 to 8 miles the park offers a free (one night) hiker/biker camp with picnic table, chemical toilet and iodized well water. It’s great.

Had this beaut all to myself. Water here was high in iron.