Prologue IV: A Reservoir of Malaria

I ate an apple this morning while pedaling down the C&O at 11 or 12 mph. Not really something to call the folks at Guinness about, but it’s encouraging to learn how the bike handles loaded after a few days aboard. I can feel myself getting into a routine — I know the best way to set up and break down camp, what gear lives in which pannier and what goes in the tent at night vs. what stays on the bike.

Quiet and cool in Oldtown, Maryland, this morning –had my rain jacket on in the dry to keep the chill off and saw few souls on the trail.

Today’s big engineering project is the Paw Paw tunnel, at 3,118′ long. Two 3,000+’ tunnels in two days? I lead a charmed life. The tunnel (originally budgeted at $33,500, actual cost: $600,000!) took 14 years to build (1836-1850) using picks, shovels, immigrant labor and black powder and completed the connection from Georgetown to Cumberland. Portions of the canal had been in use 20 years before Paw Paw opened, but the tunnel was a key element in the canal’s battle against rail. Because path designers chose to cut through Sorrel Ridge, much excavation took place in shale seams, leading to frequent collapses. Injury and death were “commonplace,” according to an informational sign. The same sign states that the tunnel used approximately 6 million bricks in its lining. This delay in opening and massive cost overruns helped the locomotive win the path West.

While Big Savage and Paw Paw are about the same length, they’ve totally different feels. Big Savage is paved, tall, almost airy. You can easily ride through two abreast. Paw Paw is dank, drippy and dark. It’s next to the canal and requires you to walk your bike, single file on a path four feet wide, which really does a number on your average speed for the day.

The towpath was extra sloppy on both sides of the tunnel, probably because of underlying rocky geography combined with recent rain. We traded precipitation for mosquitos. Even dosed with 98.25% DEET, I kept my trailside stops to a minimum, shortening my exposure to the ravenous succubi. The abandoned and feral canal is a great incubator with all its standing water.

At Lock 55 I left the towpath for the Western Maryland Rail Trail, a 20ish-mile-long ribbon that runs along old railroad bed and roughly parallels the C&O. It’s blessedly paved and after 3.5 days on gravel, felt nearly orgasmic. I was able to cruise(slightly uphill!) in the mid to upper teens with the same effort that returned 11 or 12 mph on gravel. A change of scenery was also appreciated: pretty western Maryland farmland on display and daytripping locals enjoying the path. Rolling into the Hamlet of Hancock for lunch, I emerged to blue sky and big sun — it turned into a fabulous afternoon.

Spirits buoyed, I hopped back on the towpath at Little Pool and met my Dad at Ft. Fredrick, a pre-Revolutionary installation. We turned the pedals together to tonight’s stop: Lockhouse 49 in Four Locks, an honest-to-God house with four walls, a roof and mattresses. Finished in March 1839, there’s romance in a nearly 200-year-old house full of history. Sitting on the porch, surveying the locks, staring at the Potomac River, you don’t have to imagine too hard to see this place in its heyday. 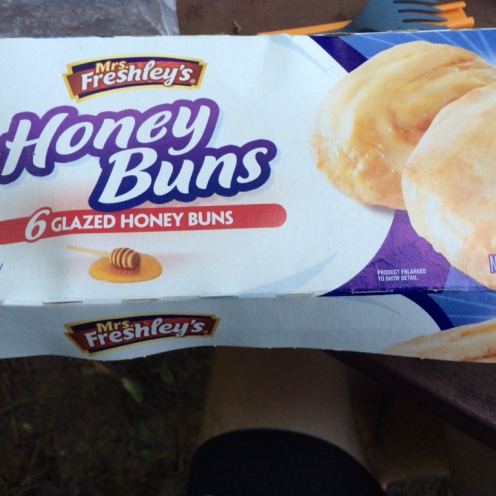 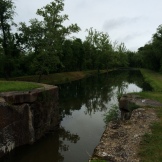 Hey, there’s water in the canal here! Just outside Oldtown, Maryland. Portions of the canal are regularly watered; others are dry and some vile cesspools of malaria and red-eyed death.

Looking into the Paw Paw’s maw. Even from this view, it’s possible to see the mountain we’re passing through.

A few bricks short of 6 million. 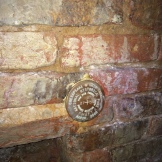 Hard to see, but this survey marker shows where a shaft was sunk from the top down, allowing workers to dig from multiple directions. 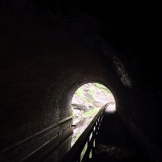 Nearly through the Paw Paw.

A libertarian’s worst nightmare. Regardless of your views, having easily accessible water every 5 miles in the middle of the freakin’ woods is fantastic. Some wells tasted sweeter, others high in iron or sulfur.

Right past Lock 49 I ditched the towpath for the Western Maryland Rail Trail, which covers about 20 miles of old rail bed. It’s paved, and you can just make out the towpath toward the middle of the photo. I rode it to Hancock for lunch. 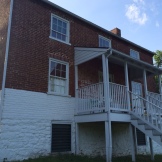 Home for the night. Four walls, a roof and a mattress. Hog heaven.