Today marked two records: My lowest average speed, 10.2 mph (lots of walking through washed-out and muddy towpath unfit for two-wheel consumption), and highest maximum speed, 32.5 mph (working my way back to the C&O from Antietam Battlefield), which is quite an accomplishment considering my bike’s about as aerodynamic as a chrome toaster. I try to ignore the computer on rides — just using it for total mileage and mileage between map turns (unnecessary when your only directive is southeast for 335 miles) — but I am tracking a few metrics and am curious to see how average speed changes as a function of my fitness and the terrain’s topography. Despite what the computer tells me, I felt faster. A day off, getting in bicycling shape, and dumping a little weight conspire with winning results.

Lots of historical action today. Just down the towpath from Four Locks is Williamsport, Maryland, which very nearly became the capital city when George Washington visited it before selecting D.C., about 100 miles to the east. A Williamsport ranger confirmed the towpath was open downstream, though till recently  it’d been closed with all of the recent rain. Rain and water played an integral role in the C&O’s development and use: damming the Potomac to ensure adequate water for transport, as well as engineering structures to protect from flooding. In fact, during the Civil War, parts of Robert E. Lee’s Northern Virginia Army found themselves isolated by a swollen, impassable Potomac. Only with some clever pontoon-bridge building did they escape to fight another day.

Past Williamsport, you enter Big Slackwater, an area of the Potomac ballooned by Dam No.4. Here, because of escarpments along the river’s edge, dynamite was needed blast the rock face open. Rather than blast enough room for the towpath and canal, architects decided to simply route the boats out of the canal, and into the Potomac here for four miles (MM 88-84), and just cleave a narrow strip for the mules to walk. So here, as in a couple of other places along the 184.5 miles, the canal is the river; the river is the canal. After the C&O closed in 1924, flooding and lack of maintenance destroyed the path, requiring visitors to detour along narrow country roads. In 2012, the park completed a two-year, $19-million project to reopen the original thoroughfare. So now you can ride along the river, which is much more pleasant, not to mention historically correct. The detour terminated (and still does, when the Potomac’s raging) at McMahon’s Mill, an attractive clapboard construction that generated flour via water power.

At Sharpsburg, we left the towpath behind for a while and pedaled up into town for a burger and beer at Captain Bender’s Tavern (Natty Boh!) and Nutter’s ice cream (official sponsor, 2014 Summer of David) before taking a look at Antietam Battlefield. Here, in September 1862, more than 22,000 Americans were killed, wounded or went missing. It’s the single bloodiest day in U.S. history. The park is colossal and somber — there are examples of cannon about — with rolling hills and acres of green grass, surrounded by farmland. The hills allowed for both sides to illustrate how gruesomely effective cannon could be in the field. Scattered throughout the battlefield are monuments to the casualties. Curiously, by state. During the 1860s, military dead and wounded were very much attributed to their home state, and not simply, the U.S. I grant that the Civil War was a special case, but back then people would be more likely to say, “I’m a Virginian,” or “I’m a New Yorker,” than “I’m an American.”

Past Antietam, and my aforementioned land speed record, it was back to pea gravel and mud. We went past Harper’s Ferry, but didn’t explore. I wasn’t keen on climbing a whole bunch of stairs with an 80-lb bike, and the town, while neat, is fairly touristy. So instead of a Harper’s Ferry anecdote, hear this: the Appalachian Trail crosses the Potomac from West Virginia into Maryland at Harper’s, and then follows the towpath for about three miles, before going its own way again, ala Stevie Nicks.

Home for the evening is Brunswick Family Campground. It’s commercial, but $5 a head buys hikers/bikers a hot shower, electricity, wifi and a place to set up a tent. Quite, too, though we stayed on a Sunday night. Dinner was fabulous falafel from Potomac Grill, where the food was excellent, and the service genuine. Tomorrow, home and the suburbs.

My dad and me Sunday morning. Blue skies.

The C&O company built a series of dams to ensure adequate water through the canal’s 184.5-mile run.

This old warehouse is Williamsport’s C&O visitor center. Here, we received confirmation the the towpath was open through Big Slackwater. 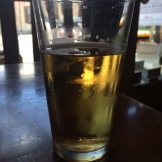 Once upon a time, National Bohemian a/k/a Natty Boh was Baltimore’s premier adjunct lager. Now owned by Pabst and brewed by MillerCoors, it’s perfect for a hot day. You can order a Boh-tini, where your pint glass’s rimmed with Old Bay. Exactly what you’d expect, and exactly what I needed. 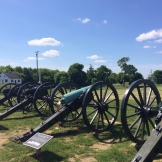 A collection of guns: the copper cannons are smoothbore; the cast iron, rifled.

The towpath goes right past Harper’s Ferry. You have to cross the Potomac to reach it (and West Virginia). We passed, but these trains certainly won’t.

Starting in Harper’s Ferry, for about three miles the Appalachian Trail parallels the towpath. Harper’s Ferry’s a rough midpoint on the 2,100-plus mile Georgia-to-Maine trail. 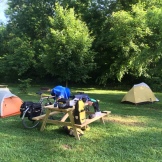 Home for the evening. Very close to New Brunswick (née, Barry, oddly enough) CSX depot, but not sleep-snatchingly so.