Irrigation’s prevalent in this part of the country, and the early morning sun fragmented water into dozens of mist-displayed rainbows.

It dewed heavy overnight, and the cold surprised me this morning, sleeping at 4,600′, the lowest I’ve been in quite a while. I said goodbye to Davide, who had all day to make his destination: a Dillon bike shop.

Riding into Dillon was pleasant, and I got a peek at Beaverhead Rock, a formation that’s served as a landmark for thousands of years and played a role in the Lewis and Clark expedition. Dillion’s home just just over 4,000 people, and I paused here for groceries and to fill my bottles as there’s no service till Jackson, quite a ways down the road.

Here I made my first significant wrong turn of the trip. It cost me 12 miles and I’ll take about 75 percent of the blame. Dillon’s big enough that the ACA gives you a detail map. The instructions say to turn right on old highway 91/frontage. I did, but it was the wrong right on the highway. So I ended up headed the opposite direction for about six miles. Turned around and frustrated, I got back on track. The map should be notated — also it turns out you continue straight onto Highway 91– it’s not a right-hand turn. The maps are pretty good, though occasionally they call for a right and indicate a left, or vice versa. I’m still very glad to have them, warts and all

ANYWAY, after my mix-up, I had two tough climbs: Badger Pass and Big Hole Pass. Both had decent downhills, and I met Stacy at the top of Big Hole Pass. She needed stitches after a crash when a pannier fell of a bike in front of her, and riding over broken road caused too much pain, so she’s rented a car for a couple days. They’re calling it quits in Jackson, where there’s a nice Hot Spring Resort/Campground.

I kept rolling to Wisdom (pop. 120), and the last 18 miles with the sun low in the sky were perfect: Wind low, gentle downhill. I planned to cook tonight, but it started to rain, so a beer at the Antelope turned into beer and pizza. I met Karel, a 60-year-old Dutch cyclist who started in Astoria and came up Chief Joseph Pass this morning. He ran into Wouter three or four days earlier.

I’m camped in Wisdom’s American Legion park tonight. Also here are four Harley riders (three brothers and one brother-in-law) from Idaho Falls. The park reminds me of C&O camping facilities. There’s two outhouses, a hand pump for water, a fistful of picnic tables and loads of mosquitoes. All the essentials.

The Lewis and Clark expedition used this as a landmark, as have native people for thousands of years before them.

This is prime grass-growing country. 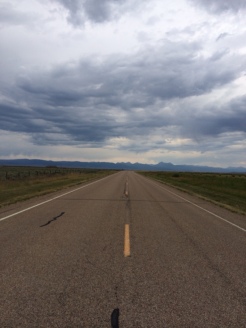 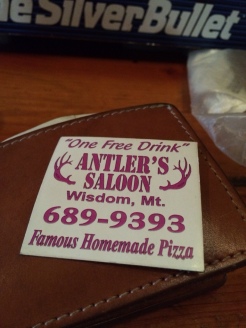 Sharing with four Harley riders, the park reminds me of the C&O. It’s free, but you get what you pay for: outhouses, picnic tables and a hand-operated water pump.