You know the feeling as you’re ratcheting up before the first drop on a roller coaster — that slow reeling of cable and pulleys, clicking home every few feet. This is prime time to reflect on all the undone, unsaid things in life, as well as the prosaic: Did I pay my life insurance bill? Who will raise my children when this coaster goes off the rails?

That’s how I felt on the easy four-mile climb to the top of Chief Joseph Pass (7,400′), and my seventh and final Continental Divide crossing (if you follow the TransAm exactly, you cross nine times, but I missed two in Yellowstone during my off-route tour loop). I’ll be on the Pacific side for the rest of the trip. I’ve read that some cyclists crest 50 m.p.h. coming down Chief Joseph, and many don’t drop below 40 m.p.h. for miles at a time. So, I spent a lot of time thinking about my worn rear tire, the possibility of scree on switchbacks and the likelihood of a deer coming out of the treeline during my descent. And, then, of course, you go over the precipice, and there’s no time for anything except to hang on, and try to make a funny face for the camera. Afterward, you reflect on how big of a grease spot you’d leave on Highway 93 if a tire let go.

In actuality, I kissed 35 m.p.h. coming down the hill, and that was pedaling pretty hard. Next time, I need to bring more weight, hope for better winds or maybe get a little more aero (at least as aero as a fully loaded touring bike can be). But I sunk too much time developing the roller-coaster analogy climbing the pass, so I’m sticking to it.

The Harley riders beat me out of camp this morning — they’re headed to Bozeman. I stayed in my tent a little longer — it’s a cold morning, and I’m in no hurry. Big Hole National Battlefield, nine miles down the road, doesn’t open till 9 a.m., and it’s on my list of places to stop. In August 1877, the U.S. and non-treaty Nez Perce fought a battle in the valley. The Indians hoped that they’d leave their quarrel with the U.S. behind as they left Idaho. This battle affirmed that the government was serious about pursuing those who refused to cede ancestral lands in Idaho (breaking an 1855 treaty).

Over the pass, It’s all downhill to Hamilton (pop. 4,348). I stopped for lunch in Sula (Lois and Clark also stopped here, and I  bet they at put a sandwich together.) and saw a herd of mountain goats scrambling on the cliffs. The route along Highway 93 follows the Bitterroot River, and it’s beautiful country.

I’m camped out in the backyard of trail angels Terry and Carl Tignor. Carl’s the biggest Hokies fan in all of Montana (so says Terry), and we talked football for a good long while. He’s from Virginia Beach, and the Tignors are getting ready to move back to the 757. I’m glad I had a chance to stay and meet them before they hit the east coast. Terry works at the hospital till 10 p.m. tonight, so I’ll meet her in the morning. 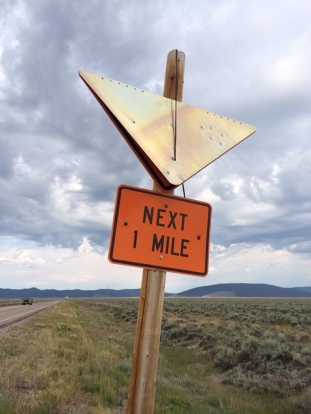 These are popular in Montana. This one says “Rough Road”. It’s also popular to shoot at said signs.

Also my seventh and final Continental Divide crossing. If you follow the TransAm fully, you get nine crossings. I missed the two in the handful of miles between Grant Village and Old Faithful. I didn’t feel like backtracking all the way to Grant Village. 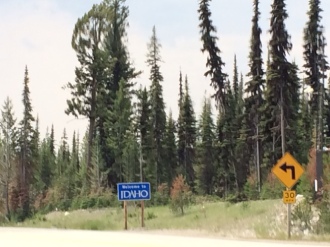 But I’m sticking to Montana for a free more days. At the junction of 43/12, turn left for Idaho or right to stay in Montana. The two states share operation of a nice rest area across the road.

That’s the limit a brewery can pour per person, per day. They also must close by 8 p.m.

I’m camped tonight with trail angels Terry and Carl T. They’re getting ready to move to Virginia Beach, and I’m glad I had the chance to meet them.